Hindi Diwas: Controversies often take place in the states of South India regarding the Hindi language. Sometimes this dispute goes beyond the linguistic dispute and becomes violent. But this time a demand has been made by the former Chief Minister of Karnataka regarding the Hindi controversy. Former Karnataka CM and JDS leader HD Kumaraswamy has written a letter to Chief Minister Basavaraj Bommai that Hindi Divas should not be celebrated in the state.

Former Chief Minister HD Kumaraswamy said that if ‘Hindi Divas’ is celebrated in Karnataka, it will be disrespectful to Kannada people. Further written in the letter that CM Bommai should not celebrate Hindi diwas by spending tax payers money. He said that forced celebration of Hindi Diwas on September 14 would be an injustice to the people of Karnataka.

In a letter to the government, HD Kumaraswamy said, “To forcibly celebrate the Hindi Divas program sponsored by the central government on September 14 in Karnataka by the state government would be an injustice to Kannada. I urge that there is no reason why the Govt. in Karnataka Hindi Divas should be celebrated by spending tax payers money.”

Kumaraswamy said that the central government can take steps to celebrate Hindi diwas as ‘Bhasha Diwas’ so that everyone will be able to celebrate the day of all languages ​​in the country. We will definitely support the center if it decides to celebrate Bhasha Diwas instead of Hindi Diwas. Kumaraswamy said that if the BJP in the state or at the Center believes that Hindi can be easily implemented in Karnataka by putting in the trilingual formula, it will be strongly opposed. 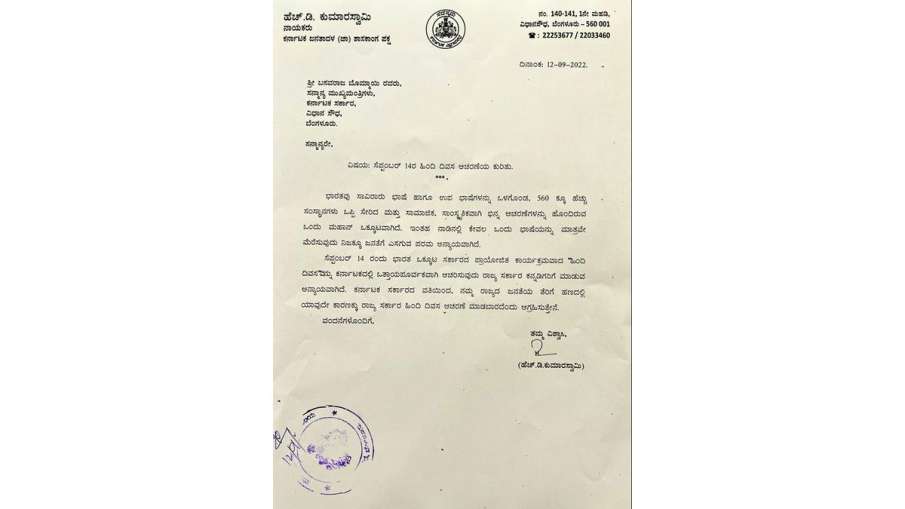 Hindi is opposed in the states of South India

Let us tell you that there has been a long movement towards Hindi in the southern states. In Tamil Nadu, there has been a major movement towards Hindi in the 1960s. When the Modi government made Hindi compulsory in the trilingual formula under the new education policy, it also sparked quite a controversy in the South. The Tamil Nadu and Karnataka governments opposed it.