Puri: Chairman Draupadi Murmu She walked about 2 km on the Grand Road in Puri, Odisha, reached the 12th century Lord Jagannath temple and prayed for the welfare of the country. Due to Murmu’s visit, the temple was kept closed to the public from 10:30 am to 1:00 pm. But hundreds of devotees lined up on both sides of the road leading to the temple to greet the President.

Murmu, who hails from Odisha’s Mayurbhaj district and hails from a tribal community, touched the 34-feet tall Arun pillar in front of the temple’s lion gate. The Lord JagannathHe knelt before the idols of Goddess Subhadra and Lord Balabhadra and prayed (with a sham). The President, who arrived in Bhubaneswar earlier in the day, stunned her security personnel when she halted her convoy in the middle and got down from the vehicle and started walking towards the temple on foot like a regular devotee. She walked with her hands raised while paying obeisance to Lord Jagannath. He also accepted the greetings of the people standing in the way.

On his way to the temple, Murmu reached out to the students of Utkal Hindi Vidyalaya waiting beside the Grand Road and interacted with them and their teachers. He also posed for pictures with the children. Murmu himself worked as a teacher in the 1990s. On his arrival at Singhdwar, the President was received by Gajapati Maharaja Dibya Singh Deo of Puri, temple priests and officials. Dev presented him a painting on behalf of the temple. When Gajapati Maharaja expressed displeasure at the president saying Namaste, Murmu said, “You are the first servant of Lord Jagannath and the embodiment of God”.

Murmu, expressing his reverence to the deity, washed his feet at Singhdwara and entered the temple like ordinary devotees. He touched all the 22 steps with his hand while going to the temple. This information was given by the President’s family priest Rajratan Mohapatra. The priest said, “We accompanied the President till the sanctum sanctorum where he lit the lamp and prayed for about 15 minutes.” A garland of hibiscus flowers is offered at the Bimala temple. The President was accompanied by his daughter Itishree. 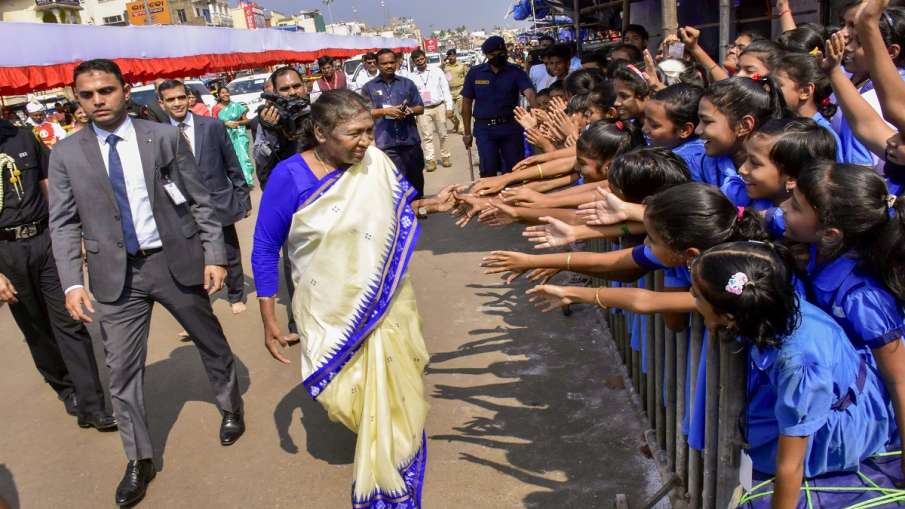 Murmu wrote in Odia in a notebook kept with the priest of her family: “I feel lucky to have darshan of the deities in the temple premises. I felt wonderful bliss praying to Lord Jagannath who is the god of all people of Odisha. Mahaprabhu is the ‘daru devta’ of the tribals (god in the tree of the tree) and the deity of the whole world. I pray to him for the welfare of all mankind. May our country rise to the pinnacle of prosperity and development with the blessings of Lord Jagannath.

While leaving the temple, the President garlanded the statue of Utkalamani Gopa Bandhu Das near Singhdwara, which was established by Mahatma Gandhi in 1934. Mohapatra said that Murmu has visited the temple many times. She has visited the temple as an MLA, as a Minister and as the Governor of Jharkhand. He said: “I have been with him on all occasions. But this time she looked deeply spiritual and very emotional.

Over 25 police forces have been deployed for the President’s visit to Puri. Before leaving for Bhubaneswar from Puri, the President went to Raj Bhavan here where he received ‘Mahaprasad’. The President was received by Odisha Governor Ganeshi Lal and Chief Minister Naveen Patnaik on his arrival at Bhubaneswar airport.