In fact, for the last two to two and a half decades, Ghulam Nabi Azad was the flag bearer of the Congress party in Jammu and Kashmir. He was also the CM of Jammu and Kashmir. But for some time he has been marginalized in his own party. Ghulam Nabi Azad was one of the senior Congressmen who started being sidelined as soon as Rahul Gandhi became active in politics. He also occasionally expressed his opposition to the party high command.

Hints at the party many times in his statements

Although Sonia Gandhi wanted to see Ghulam Nabi Azad active in the party, but for some time she felt suffocated in the party. On many occasions, in his statement, these things were spoken in gestures. He had even once said of leaving politics out of desperation. Considering the Congress party as his life, he also waited for a very long time for the party to get back on track and everything would be better, but it was pointless for him to wait. Finally his patience paid off and the result came today in the form of leaving the party.

In February last year, when Ghulam Nabi Azad was removed from the Rajya Sabha, Prime Minister Narendra Modi praised his political tenure in his speech in his honor on the occasion. In his speech, PM Modi himself also got emotional many times. Then these speculations were made in the corridors of politics that he might join the BJP anytime. But from the Congress point of view, he dismissed all these speculations and worked for the party as a true Congressman. But the way he seemed unhappy with the functioning of the Congress in the last few years, it seemed that he might leave the Congress. Because he himself said that Congress is no longer the Congress it used to be. He even said that this Congress cannot change now. It hurts to say these things to someone who has devoted almost his entire life to the party. 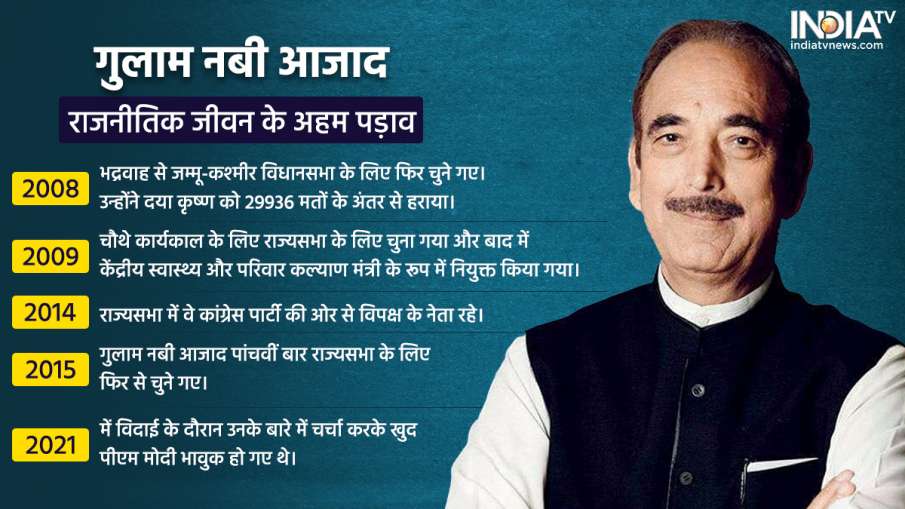 In 1973, Ghulam Nabi Azad started his political career as the secretary of the Block Congress Committee in Bhalswa. After this, seeing his activism and style, the Congress elected him as the President of the Youth Congress. Azad contested the first general election in 1980 from Washim constituency in Maharashtra and won. In 1982, he was admitted to the cabinet as a Union minister. The golden period also came for Azad in the year 2005 when he became the CM of Jammu and Kashmir and served the state. He also held the charge of many important ministries While Azad was the president of the Jammu and Kashmir Pradesh Congress Committee, the Congress had won 21 seats in the assembly elections. The Congress then emerged as the second largest party in the state.